Oh boy, has this been a holiday whirlwind!  After Christmas, I spent a fun 3 days sick with food poisoning.  Yuck!  But now, I'm back to my old self and ready to start the new year (well, almost new year!) with something healthy for my body, and my family's bodies as well.

I've been wanting to start a vegetable garden of some sort for awhile now with my daughter.  I found this really awesome website called Sprout Robot where you can put in your zip code and it tells you what to plant and when to plant it based on where you live.  Cool, huh? Based on my zip code, now is a good time to plant broccoli, leaf lettuces, radishes, cabbages, peas, and a few other things.  I decided to go with peas because Olive loves them and I've heard they're pretty easy to grow.  I'm going to try cabbage, too, but that will be in another post.

We made a trip to The Home Depot and picked up our supplies: potting soil & seeds.  We already have a few pots.  The organic soil was twice the price of the other soil, so I figured I'd get one of each and mix the two together so I could save some money but get some of the organic goodness as well. 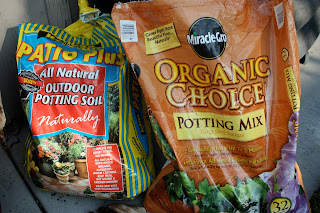 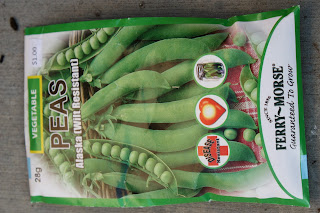 Some cute toddler-sized gardening tools don't hurt to have either! :) 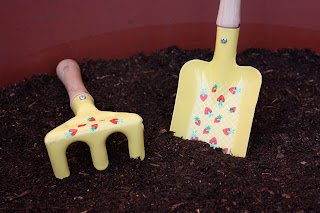 Let's play in the soil for a while...That sounds fun! 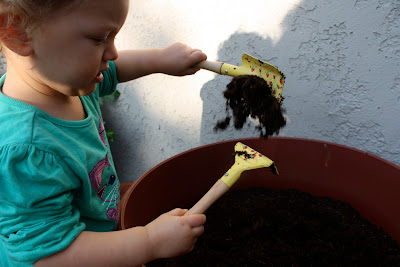 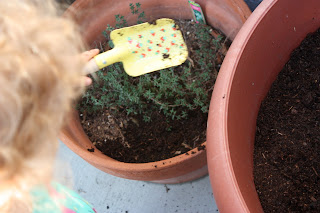 Finally, planting the pea seeds.  The directions said to push down 1 inch...We'll see how they do! 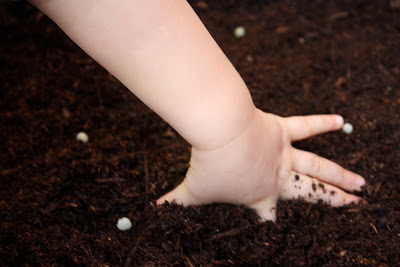 Make sure you water the new seeds! (With Mama's help to ensure the water gets on the seeds and not everywhere else!  Normally, I wouldn't care, but it was kind of chilly outside and I didn't want a soaking wet baby!) 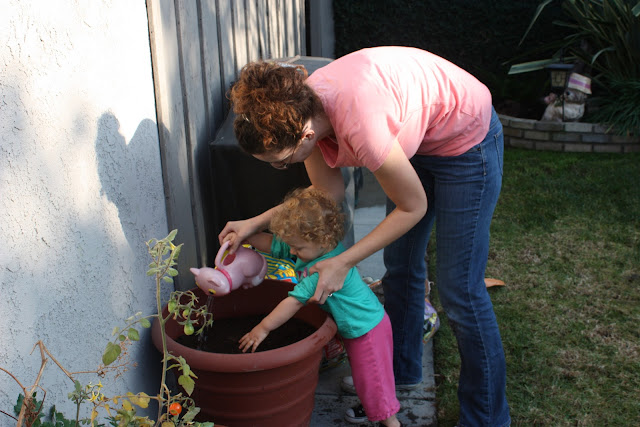 Also, make sure you eat some tomatoes that aren't really ready to pick and are kind of sour and gross....Ay yai yai! 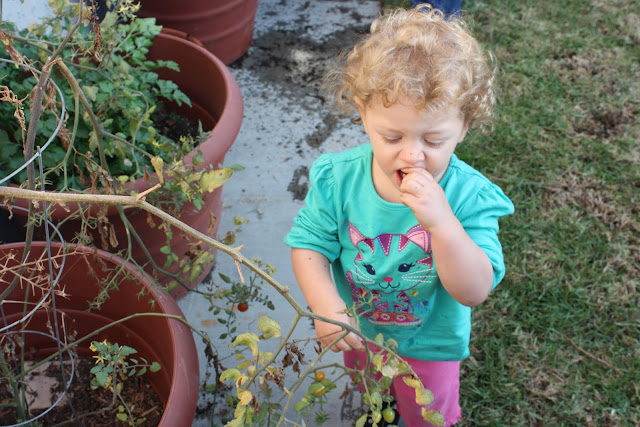 After all was said and done, she wasn't really interested in what we were actually doing.  Playing with the soil, eating growing tomatoes, running on the grass...yes, yes, yes.  But planting the seeds?  Not so much!  We'll see if she's more interested when they start to sprout and then grow actual peas.  After I put the camera down, we played around the backyard, finding worms, pulling grass, digging rocks, and getting dirty.  That's what she wanted to do, and when it comes down to it, that's what really matters.  Even though I want her to be interested in the process of growing the peas, she's more interested in other things, and that's okay.  I sometimes forget just how small she really is and I end up expecting her to want and to be interested in different things, when in reality, she's just a little 19 month old baby who wants to eat sour tomatoes and rip apart grass.

Olive's Mama
Hi there! My name is Natalie and I am a mama to a beautiful 1 1/2 year old little girl, Olive. I am married to my husband Jonathan and we live in sunny California. After my daughter turned one, I left my job as a teacher to stay home full-time. I have really gotten into crafting and art projects as a way to keep us busy as well as enrich my daughter. I have always loved creating art and crafting and I'm hoping this blog will give me motivation to do more of that! I love to be creative in many areas of my life and I hope you do, too! If you have any questions or comments, please let me know! :)

I Love These Blogs!

Awesome People Who Read My Blog!